Oy! It's been a while since the last update, and a lot going on since then: a few holidays, and moved with my family into our new house :phew: - but finally got this update to the point where I think it's ready for general consumption :D It'll probably have a few rough edges, but will love to get people's feedback on all the new stuff in it.

So what's in it? Well the bigger new feature as you can probably guess is researching! I've been wanting to add a research aspect to the game for some time, to give the game a bit more progression as to what you're able to craft, add a little more challenge, and provide some motivation/incentive for players to keep exploring.

Scattered throughout the world you'll now stumble grey cubes, these are "Unknown Artifacts". Once you start collecting these, you'll want to build a Research Lab in order to process them to discover what they actually are. You'll then earn Research Samples (points) for discovering them, and you'll use those points to unlock tiers in the tech tree.

Few more notes on the tech tree. The costs are a work-in-progress, (along with how frequently you find artifacts in the world) - maybe it's too easy? Let me know what you think.

In case you don't want to bother with researching, there's also an option for new games in the World Settings for starting a game with all tech unlocked.

Older game saves (<0.42) will automatically resume with everything unlocked, because it would be annoying to have a big base, but not be able to keep crafting more of the things that you already have in it. 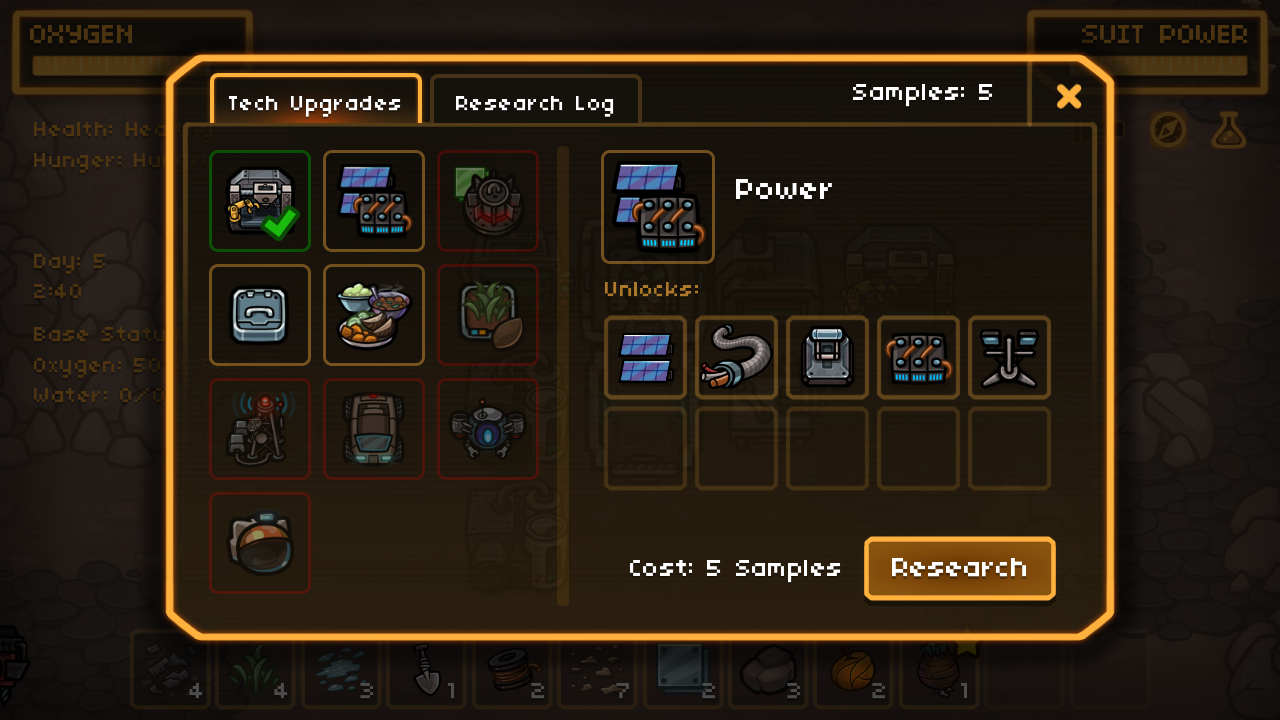 One of the higher cost tech-tree items is a suit upgrade, that gives you 50% more oxygen and suit power, and with its fancy lighter-weight material, makes you get hungry slightly slower. This will get some unique cool looking character art in a later update.

This is a new base module, kind of like a workbench, but is where larger and more complex modules are now made, like habitats, airlocks etc.

You can now drag and drop inventory items around! Yay! It's not quite perfect (can't have empty slots between items), but still a great UX improvement.

Speaking of inventory stuff... Now you can right click on the buggie to open up it's truck/boot and stick 6 more items in it to take with you on long expeditions.

The new buggie storage is definitely a first pass, just to make sure it's working. What I'd probably like to do next is to add in a few different classes of vehicles. Some might be fast, but have no extra storage, others might be a bit slower, but have storage or have other unique capabilities... something like that.

Expanded the tutorial a bit to give new players info on dropping items (inventory fills up quick!) and a couple quick notes on discovering artifacts and the tech tree (mainly pointing out that it exists). If you have ideas for gameplay features that you could've used a tutorial note for, please let me know.

Been slowly starting to add in gamepad controller support to the game. Menus don't work at all yet, but in-game walking around, driving, picking up items, placing bases is all slowly getting there. So far this has only been tested on Linux and Win10 using an Xbox360 controllers. There's still a lot more to do (remapping UI, eating food etc).

It's all fancy now! 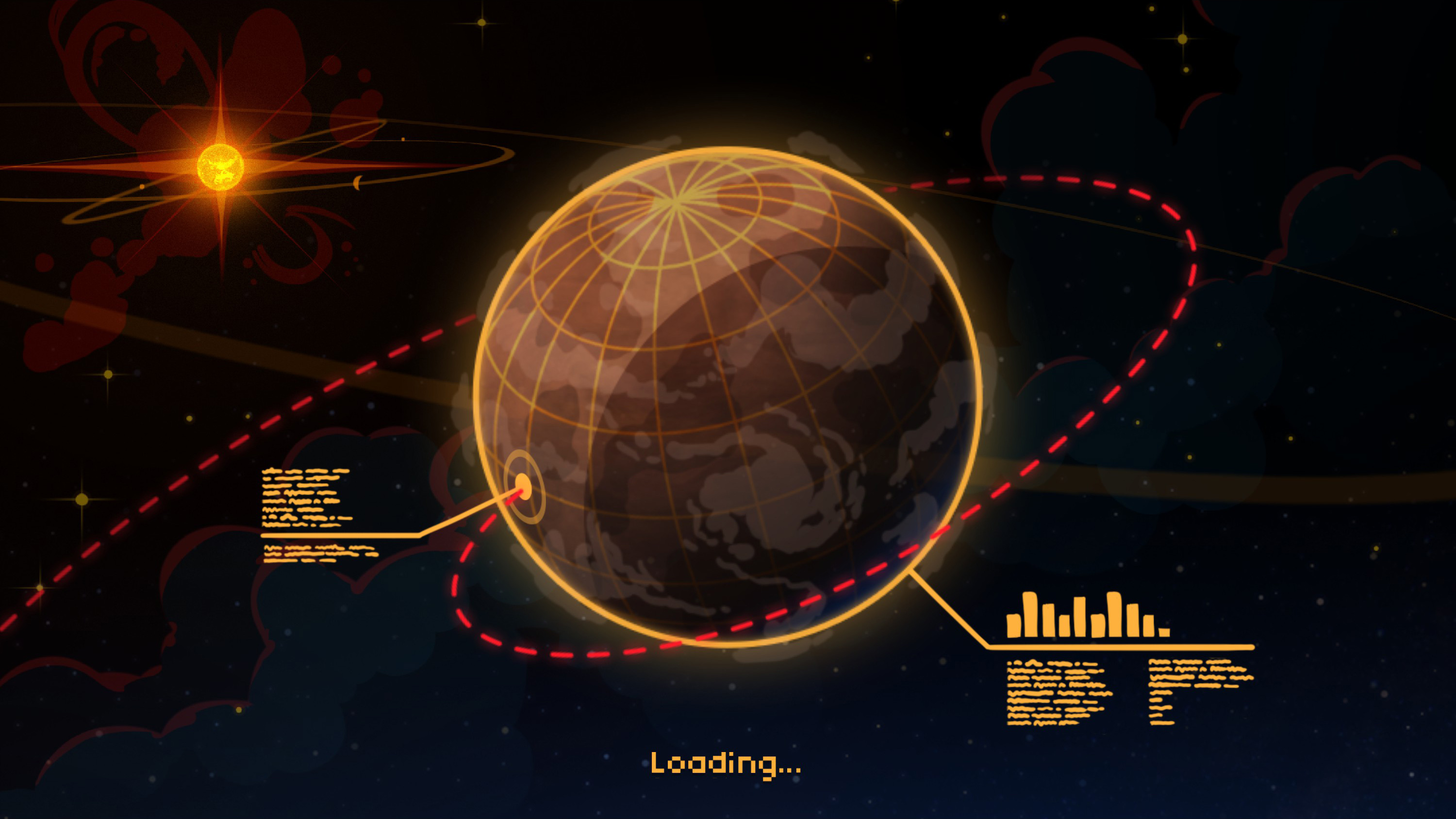 Added in a great library [https://github.com/Anuken/GDXGifRecorder] for capturing gameplay footage as a gif. Probably mostly useful for me... F9 activates the UI for selecting what part of the screen to capture, F10 start and stops recording.

Crafting with a full inventory

Lets say your inventory is full, you have exactly 3 plants, and you wanna craft some plant-slop. Before the game would just tell you "too bad, inventory full" - even if crafting the slop, would've consumed all 3 plants and free up an inventory slot. Well now it's smart enough to let you do stuff like that.

Your player sprite now renders properly in front of or behind items as they walk by. Looks way nicer.

Have you ever launched MewnBase, and the window just closes immediately, without any type of error message?  Annoying right? Well now it can be slightly less annoying.. by giving you a popup with the crash info, as well as having the messaged put into a log file in your MewnBase folder. Then you can send to me... or slap in the forum, and it'll greatly help me figure out what I did wrong!

It's way out of date now since I paused my Crowdin subscription last summer. Still planning to bring that back at some point to allow for community managed translations, just not sure when.

Other minor tweaks and changes

Known bugs still in the game

Things still in progress for a future update

Thanks for including a lot of my suggestions! But plz, add tree removing, its a nessesity for megabases...

Yes, definitely going to add that. The question is how easily do I want to make it for myself ;)

Easy option (but less interesting): I make a tool that lets you just cut them down.  Problem solved. An axe or saw would be the obvious thing to craft.

More complex considerations, but more interesting: Tool that lets you cut them down, but is also useful elsewhere in the game (since removing trees doesn't need to happen that often). Then the cut down tree drops... wood/something similar... then what to craft with that resource etc.  Totally open to suggestions, I haven't had time to give it much thought yet :)

Just just go with option A at least for now... just since they are annoying that it's the only land-tile you can't remove.

I'd suggest using the trees for some sort of carbon-based generator. You know, a fuel source. I don't own this game, so I don't know if something like this already exists or not.

What about a tool that lets you uproot trees and replant them? You could have a little orchard by your base.

so GREAT!! the update rocks, love it so far!

.... question about  suit 2, once you've researched it do you have to build it or is it automatically changed?

I haven't gotten that far in my new game but in my loaded games is my cat already wearing the new suit?  I'm just a little confused

Ha, yeah once you research the upgraded suit, you automatically get that stat bumps. As you can tell, it's hard to know - I'm planning on making the upgraded suit look slightly different / cooler looking in the next main update.  Should probably also make it so that you can hover over the stat bars and see number values.

You would think since all the tech is already unlocked that the suit upgrade would already be applied. But I just tried loading an older game, saw that everything was unlocked in v0.42.2, saved it, and checked the save data... and it looks like the suit is still at level 0.

So that's a bug.  If you wanna get the suit upgrade in your older game, hit F1 and type in:   unlockTech suit
You should see your Oxygen bar and stuff refill.

So, if you want to publish this game on Steam I would reccomend that you sell itfor  free BUT develop a 'game-launcher' to ask for a special 'key' you would buy on whatever site you want or linking it with itch.io. If you want to use another website than itch I would love if every player, who owns this game has this 'key' displayed on main menu. (Sorry for BAD typos).

OMG THIS IS AMAZING! Can't wait for more awesome stuff keep it up :P