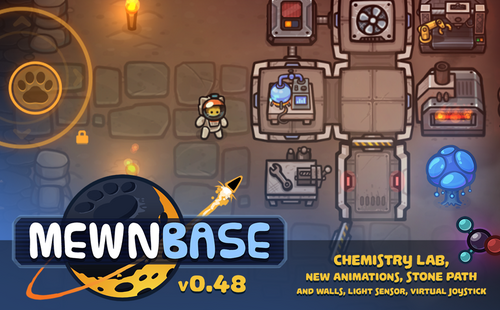 As always, if you encounter any new bugs or issues, or just want to say hi - hop on over to the MewnBase Discord Server!

I love this game and I came up with an idea that would be cool to add in the future. It would be a later game feature where you can research a building drone  that when you use it could give you an overhead view of your base with a grid style overlay. The drone would let you move parts around without having to have your space cat go to each piece and remove it and then place it.

Since it's late game you'd still have to do things manually early on but once you can research it, it would be a nice perk for people who like to really organize their base.

Even if the feature is something you don't see yourself adding, or would be too put in, I still love this game and I always get excited to see each new update. Great job on this awesome game!